skip to main | skip to sidebar

It is now late March, 2010, time for a bit of FlipVideoing at Mellerstain House before the Easter opening here. There's been some west wing roof repairs going on since about October, 2009, and a gigantic marquee covered the whole of this part of the house. Tons and tons of scaffolding had first to be erected and then covered in by canvas to make this huge tent-like structure.

Health and safety regulations are, no doubt, a pre-requisite for this type of work on the roof of the wing.

The Haddington family had to endure the noise and a virtual black-out of natural light during the months of building work. It is now drawing to a rapid close and should be completely done and dusted before the Easter weekend opening to the public.

The adverse weather conditions during this winter period did not help! However, the builders and workmen managed to get it all finished in time; jolly good work chaps!

The Many Strands of a Web Blog

You never know who might be reading your blog. People all over the world might be just stumbling across your writings. Others, like the young lady below, will be "doing a Google" for something or other. Here's how this particular encounter evolved:

By means of a Google search, I found a comment you had posted on the blog "A Majority of Two" last December on hunting tapestries. I see that you mention Mellerstain - I am in the U.S. conducting archaeological research on early 17th C. hunting dogs, and currently trying to find an image of a hunting tapestry that is (or used to be) on display at Mellerstain Castle. It is a 16th C. Flemish tapestry including a large greyhound wearing quilted body armor for hunting large game like bear or boars. Having found no other leads, this a tapestry you are familiar with? Do you have any ideas as to where I might acquire an image of it for study? (Books, websites, etc.)

Thanks in advance,
Kelsey Noack

I went on to send Miss Noack a scan of part of the guide book on Mellerstain which has a VERY small black and white picture of the tapestry: 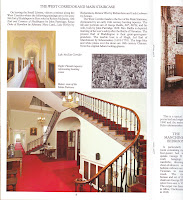 and this is her reply:
Hi Phil,

How exciting! I was able to crop the image that you sent me and enlarge it without too much distortion. (I then printed it out and showed it to several of the other staff since I've been talking about it for weeks and thought they might want to see it too.)

If you are not able to get permission for a photo, or if you are never able to reach Lord Haddington at all I understand. This scanned image you've sent is useful in and of itself. I would still like to have a more detailed image, but I can get by with this one if it's not possible.

Thanks so much, and I will look forward to any news you come up with.

Next, I asked Lord Haddington (who is an excellent photographer) if he would oblige with a full size photograph of the tapestry and he did so, as shown here: 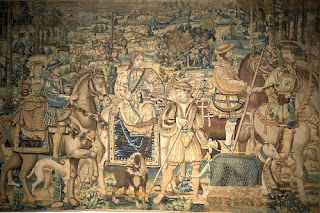 This proved to be much more useful to Kelsey, but then she sent this:

Thank you! I am slightly overwhelmed at all the detail I can see in the photo. This is wonderful. Very helpful, indeed. However, now that I can see more I am interested in higher resolution photos, or perhaps having the camera focused on particular portions of the tapestry. I have been able to zoom in fairly close on the dogs in the foreground, which is originally what I was interested in. In the upper left half I can see that there are also depictions of dogs actively in the pursuit of several boars. Would it be possible to have closer images of those portions?

Thanks to you, again, and to Lord Haddington.

I forwarded Kelsey's message to Lord H, prefacing it with saying that I doubted it would be possible to get close-ups of the areas requested because of the poor light in the area of the tapestry (and said much the same to Kelsey).

There then followed four more photos from Lord H, which I emailed to Kelsey.

The end result was a final email from Kelsey:


Thank you so very much for your help in acquiring these, and please pass on my thanks again to Lord Haddington. Very exciting to have these photos! I think they are now going to be a much larger focus of the work I am doing. I will send a copy of my paper when it is finished. It's looking like the dogs that would have been brought here to Jamestown would definitely have been hunting dogs only, and we know that a few of them at least were greyhounds according to the documentary record. In effect, the dogs pictured in the tapestry are likely the same type brought here to Jamestown, right down to the coloring! Now all that remains is to confirm which continent the dogs were from through chemical testing with isotopic analysis.


Sorry I did not get back to you right away. It was a very busy weekend and I was away from the computer. What a great thing to have waiting for me in the inbox.

So, from a blog by Jo, (A Majority of Two), with TAPESTRIES as the theme, and a small comment from yours truly on Jo's blog it was possible to help a young lady on the other side of the world in her research work.

PhilipH
Jack of all trades, master of none. Left school at age 14. RAF at age 18. Back to civvy Street in 1956. Went to work as a trainee settler in Sth London credit office, then onto betting shop management in early 1960s. Left to join Customs&Excise in 1972, mainly London, Wales and Southend on Sea. Took early retirement. Moved to the Scottish Borders in 1995 and have loved it!